The Ontario Provincial government very quietly has asked Health Nexus to redesign the Sandy’s Law sign. There are no Provincial ads seeking input so it is important for anyone in Ontario who sees this post take 5 minutes before June 15 to provide feedback.

Personally I don’t like any of the suggestions. I do not think the style is enough to catch attention nor is the wording large enough. These are the choices: 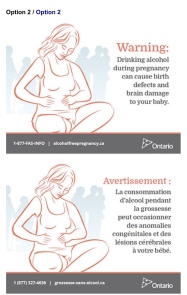 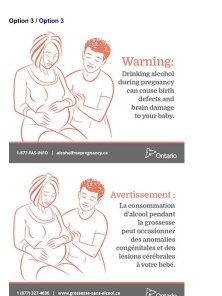 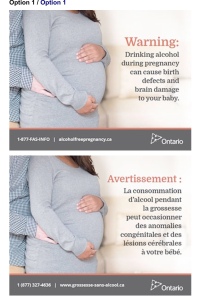 For those not aware of the background, here are some comments from Mark Courtepatte, Co-chair of the Hamilton FASD Parent & Caregiver Support Group.

The sign was first created in 2004 with the change in the Liquor Licence Act S.O. 2004 Chapter 12 -Bill 43.  It was created by a private member; MPP Ernie Parsons (now a judge with the Superior Court of Ontario) and was named after his son Sandy who had FASD and passed away during a vacation in Florida.

To my knowledge, the signage is the ONLY real form of visible FASD prevention provided by the province of Ontario.  The sign is in the process of being revamped …which is FANTASTIC as it is 15 years old.  I understand that Health Nexus is responsible for the redesign of the new sign. They have created an online survey with three choices which I strongly feel are all a step backwards and will do little to enhance awareness of Sandy’s Law.

To briefly summarize my comments on the survey and the planned three samples:

(a) the premises prominently displays a warning sign containing the prescribed information that cautions women who are pregnant that the consumption of alcohol during pregnancy is the cause of Fetal Alcohol Spectrum Disorder;

(b) the sign is posted at the premises in accordance with the prescribed criteria; and

(c) the sign satisfies any other criteria that are prescribed.

My last comment is with regard to the requirement under (a) that the signage must be “prominently” displayed.  Based on my experience, well over 90% of establishments are not in compliance with the law (including several LCBO outlets I have visited).

To meet the requirement the sign must be posted such that anyone consuming (tasting samples for example) or purchasing alcohol MUST be able to see and read the sign.  It can’t be hidden in the back (for example one Beer Store outlet had the sign posted in the Manager’s office.

I would like to request that when the AGCO send out the new signage to all the establishments that they include strong clear warning that the law requires that the sign MUST be prominently displayed, and add a further definition that prominently means that I the sign must be clearly visible and readable prior to anyone purchasing or consuming alcohol and that failure to prominently the signs is a violation of the Liquor License Act, and subject to the prescribed penalties and/or a loss of their Liquor License.

The above comments provide a great analysis of the sign and the Law. Please take 5 minutes before June 15 to make your thoughts known.