On June 1 the international movement to bring awareness to Fetal Alcohol Spectrum Disorder began with the start of Red Shoes Rock to Stop FASD and the 99 Days to FASDay. There have been some exciting new additions to this year’s campaign.

For the 5th Anniversary, a new logo, and tag line – Start the Conversation (which was suggested by the husband of an advocate and friend of mine – after she bought her first pair of red shoes – way to go Jeff & Maryann Post!) were created, along with a dedicated website: Red Shoes Rock ~ but before I get into that, let’s take a step back and look at how the red shoe movement began.

I asked Jodee Kulp, one of the co-founders, how this came to be.

In 2013 R.J. Formanek, an adult (and Canadian!) with FASD decided to wear red shoes. He  wanted to stand out and be noticed. He chose red shoes as a way to express his individuality and remind himself that he is unique. And red shoes get noticed. And when they get noticed, he was able create opportunities to talk about FASD.

It was when Jodee saw R.J.’s red shoes and asked him about them that the idea was born to use red shoes as a way to start conversations.

R.J. travels all around speaking at conferences and sharing his story, insights and wisdom about Fetal Alcohol Spectrum Disorder. He also started a virtual support group on Facebook called FASD: Flying With Broken Wings. It is administered by adults with FASD with a few advisors available when they are called upon. FWB has close to 5,000 members. They share information and strategies and support each other, and the information and wisdom they provide is valuable for parents, caregivers and professionals in learning about FASD.

R.J. was recognized for his efforts and advocacy when he received a Starfish award at this year’s International FASD conference in Vancouver, B.C., Canada.

I was honoured to have the chance to meet R.J. yesterday when he and Jeff Noble invited me along for some red shoe shopping.

Maybe next year I can plan on meeting Jodee!

The premise for Red Shoes was simple: people were invited to put on a pair of red shoes to create an awareness movement for FASD. People were invited to take pictures and post on social media over 90 Days, leading up to FASDay September 9. More about FASDay will be forthcoming.

The movement could be anything:  9 rolls, 9 steps, 9 kicks, 9 nods, 9 waves, 9 blinks, 9 km or 9 miles in a day or in 90 days. It didn’t matter what, just that if someone noticed the shoes, then it was a great time to talk about FASD. If people didn’t want to share their story, they could share messages created by the Red Shoes Rock group or direct people to the Facebook page.

There was a post last year that gave another great explanation of why red shoes. Once I find it, I will post the link.

And so that is how the grassroots movement, to build understanding of FASD and increase participation in recognizing Fetal Alcohol Spectrum Disorder Awareness Day (which celebrates its 20th anniversary this year) on September 9, led by volunteer ambassadors, began!

Although I’ve not been resharing daily on the blog, the 99 Day posts are being updated with new information and shared on OSB Twitter: @oursacredbreath, Facebook: @allaboutfasd and Tumblr:  sites as well as on the official Red Shoes Rock Facebook page.

I’m excited to report they are also being translated this year into Polish, Italian, Spanish and Afrikaans! You can find all the posts from last year here 99 Days to 9/9 FASDay: Master Post  but note that any updates will only occur as each day passes.

Last year (2017) RSR reached 250,000 followers on Facebook!  It’s reached a million all together. People were wearing red shoes in 63 countries and sharing in 45 languages.  FAFASD began sharing artwork and created a Rock Painting Campaign. Brian Philcox got the iconic City of Toronto sign lit up red for FASDay and other groups were organizing 5 k walks and holding events around the world.

This year, the RSR Campaign is focused on FASD Pioneers. Stories about the people who first started talking about, advocating and making a difference in the FASD world. It’s a fascinating history lesson and well deserved recognition of these individuals. You can find the stories here: FASD Pioneers  Other people and groups are creating “swag” or planning events. The Edmonton Fetal Alcohol Network jumped on board early with the above social media campaign inviting people to share their red shoe shots.

Where will the RSR movement reach this year?

How far will it get? What other exciting news will be shared and how will the movement grow? Stay tuned to find out! I love being part of this campaign! 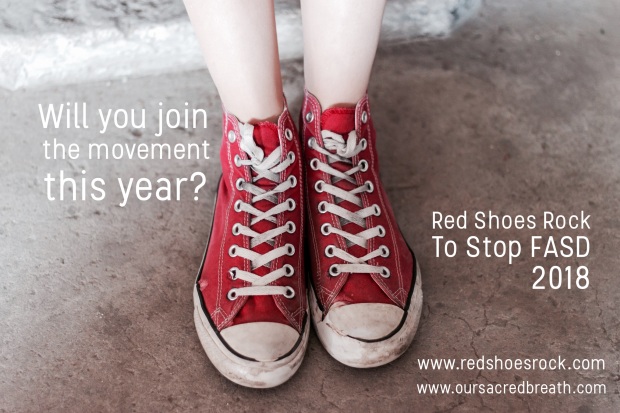 How about you? Will you join the movement this year? All you need is something red on your feet! Running shoes, dress shoes, flip flops, sandals, red socks, red laces, or red painted toenails! Visit the official website Red Shoes Rock  for free artwork, more information or to sign up! And don’t forget to let Mac know where you are from! 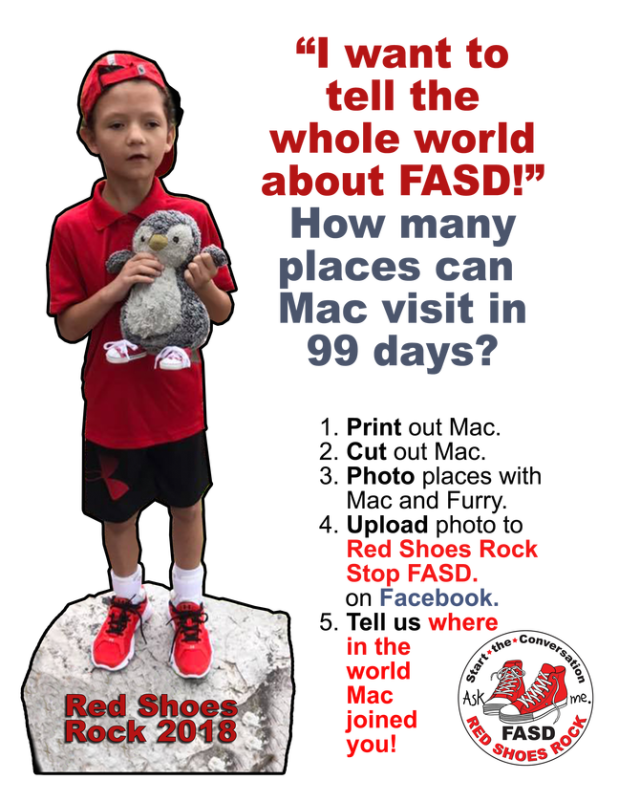 3 thoughts on “Red Shoes Rock and 99 Days to FASDay”