Comparing outcomes of children and youth with FASD in the child welfare system to those in other living situations in Canada.

Information for Day 44 has been changed for 2022. You can still find the original Day 44 of Cost of FASD in Child Welfare in Canada below, but a recent study was conducted – comparing outcomes of children and youth with FASD in the child welfare system to those in other living situations in Canada – which I felt was worth sharing.

The review was completed by Jessica Burns, Dorothy E. Badry, Kelly D. Harding, Nicole Roberts, Kathy Unsworth, Jocelynn L. Cook and published in October 2020. You can find it in the Wiley Online Library. 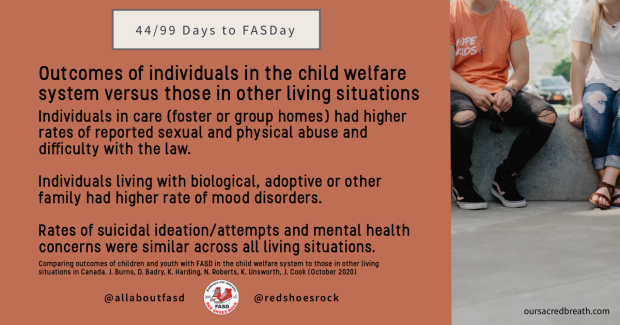 The study aimed to explore differences in adverse outcomes between youth and adolescents with fetal alcohol spectrum disorder (FASD) living in child welfare care (i.e., foster care or group home) with those living with their biological parent(s) or with adoptive or other family members in Canada.

Data was gathered from the Canadian National FASD Database. A total of 665 youth and adolescents with a clinical diagnosis of FASD under the age of 18 living in child welfare care, with biological, adoptive or other family members, were included. Key areas examined included:

The researchers concluded: These findings increase our awareness of the complexity of mental health concerns and suicide risk across all living environments. Results have further implications for policy, practice and clinical intervention.

Another report on FASD and Child Welfare was published in 2020 that concluded:

FASD is one of the most critical issues in child welfare practice today given the high vulnerability of children and families where prenatal alcohol exposure is a concern.

Responding to FASD requires skills and knowledge about FASD regarding ways to foster strengths, improve lifecourse outcomes, and address areas of concerns such as problematic alcohol and substance use, the developmental and behavioural challenges of living with FASD, and the often-complex psychosocial needs of families. Legacies of historical trauma are often present in families where FASD is present.

Child welfare workers are more likely than any other human service professional to encounter FASD, yet much of the workforce has not received training on this topic.

When FASD is not recognized, the child’s needs are not effectively met, contributing to cumulative disadvantages that can impact lifecourse outcomes. Early recognition, diagnosis, and intervention offer the best chance for success for children with FASD.

Social workers and allied health workers are key professionals in child welfare practice and are well positioned to provide FASD informed care with training and knowledge of the care needs of children and families.

Each province and territory would benefit from the adoption of a national strategy on effective case management, consultation, and responses to FASD for children, youth, and families.

Given what we learned in Day 42 of 99 Days to FASDay: Int’l Prevalence of FASD   that prevalence rates are significantly higher, once again the numbers from today are from a report released six years ago from numbers nine years old. Costs are likely higher. Is anyone noticing a pattern here?

The information today is from:

Canadian Children and Youth in Care: The Cost of Fetal Alcohol Spectrum Disorder

The study was designed to estimate:

An estimation of the cost of FASD for the Canadian child welfare system is central to describing the extent of its impact on this population, the cost to society, and for evaluating the potential benefits of FASD prevention programs.

Furthermore, the current economic estimate has the potential to provide additional policy insights in order to better address the needs of this unique population and to increase awareness of this problem not only in Canada, but also internationally.

The three provinces with the highest number of children in care with FASD:

A complete copy of the Study, which is available for download, can be found here.

If you are aware of updated studies, please let us know.

2020 Update: A new law has been passed in Minnesota (USA) requiring all children in foster care to be screened for prenatal alcohol exposure.

This year as a priority of Proof Alliance’s legislative platform, major legislation that requires all children entering foster care be screened for prenatal exposure to alcohol in Minnesota was passed and signed into law. It is believed Minnesota is the first state in the nation to pass this legislation.

Proof Alliance will be providing the training and screening tools for all counties across the state.

This will no doubt reveal concrete statistics that can be used to further guide policy in other state and hopefully other countries follow the lead. You can read more here: PROOF Alliance: Landmark Legislation

One thought on “Day 44 of 99 Days to FASDay: Individuals with FASD in Care or Not: Are outcomes different?”