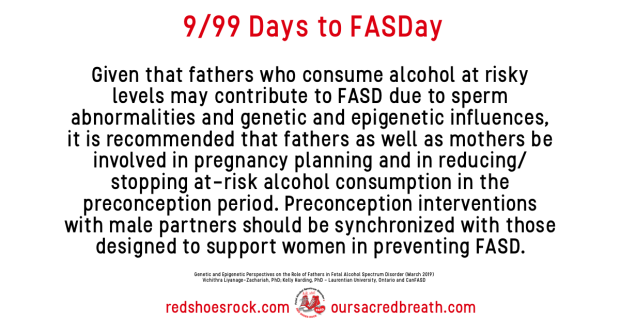 While much of the emphasis has been placed on advising women to abstain from alcohol while pregnant, research shows men who consume alcohol can cause disorders in their children. Though it’s not clear how much alcohol is a risk factor, it is clear dads should be passing on alcohol if they want to ensure their children are healthy.

A study, published in the American Journal of Stem Cells in May 2016, detailed how a father’s lifestyle can have an unexpected influence on his child’s health.

“We know the nutritional, hormonal and psychological environment provided by the mother permanently alters organ structure, cellular response and gene expression in her offspring.”

The findings showed that the same can be said with the biological fathers whose age, lifestyle and drinking behaviors can affect the molecules involved in gene function.

“In this way, a father can affect not only his immediate offspring, but future generations as well,” added Kitlinska.

Additional research is needed, but the message of Zero Alcohol For Nine Months (049) needs to be expanded to include no alcohol for men planning on having a child. 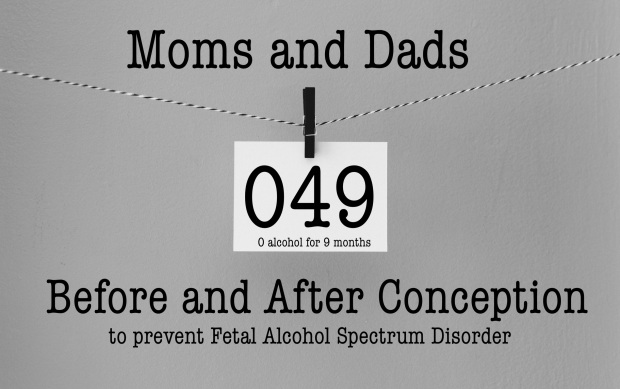 Here is a link to an article in Science Daily from 2014 outlining: Ground breaking new research has been revealed which shows dads may have more accountability.

Published in Animal Cells and Systems, researchers studied male mice exposed to varying concentrations of alcohol and one control group exposed only to saline. After exposure the mice were mated and resulting fetuses examined. The findings revealed previously unknown and riveting evidence that paternal alcohol consumption can directly affect fetal development.

Until now fathers’ lifestyle choices have not seen any repercussion on their unborn children. This ground-breaking research provides the first definitive evidence that fathers’ drinking habits pre-conception can cause significant fetal abnormalities.

Another study published in 2018 on Medical Research titled, Risky Drinking By Either Sex Can Affect Future Offspring.

We have known for many years that drinking alcohol during pregnancy can lead to developmental delays and birth defects in offspring. However, our data demonstrate that drinking large quantities of alcohol in a “binge” fashion before pregnancy can also impact future offspring and importantly, this is true for drinking behaviors of both parents, not just the mother.

Our previous data support the idea that alcohol is affecting the parental sperm and eggs to induce these modifications in the offspring, but this most recent work shows the extent of those effects on social behavior, pubertal maturation, and stress hormones as the offspring grow to adulthood.

This means that the risky behaviors of young people, such as the extremely popular practice of binge drinking, have potentially far-reaching consequences for generations to come.

You can find an article and link to the Study at: Prevention Conversation  .

CanFASD published an article in 2019: Genetic and Epigenetic Perspectives on the Role of Fathers in Fetal Alcohol Spectrum Disorder:

Therefore, even in the absence of maternal PAE, fathers’ preconception alcohol consumption appears to have an impact on birth outcomes, as well as possible cognitive and behavioural impairments in their offspring.

Consequences of preconception paternal alcohol consumption in the absence of maternal PAE have also been observed in humans, including increased likelihood of having a smaller than normal head size (i.e., microcephaly) and abnormalities in reproductive hormones and the development of the reproductive system in boys. Researchers have also begun investigating the transgenerational (i.e., parent-child-grandchild) effect of fathers’ alcohol consumption. These studies demonstrate that the impact of the fathers’ alcohol consumption may be passed on to multiple generations by changes to the male sperm.

Based on these observations, preconception alcohol consumption by fathers may result in:

These implications may change how different genes are switched ‘on’ and ‘off’ (i.e., gene expression) in male sperm. Therefore, the contribution of fathers to FASD could be explained by the concept of ‘paternal exposome’, which describes the process in which a father passes on the toxic messages he acquired from the environment to his children, in this case, passing on the toxic impact of alcohol exposure.

Conclusion:
Therefore, there is evidence that the exposure of fathers’ sperm to alcohol can pass on alcohol toxicity and cause phenotypes similar to FASD, and fathers’ genetic contribution can play a role in whether the fetus is vulnerable or resilient to maternal PAE.

Additionally, epigenetic changes caused by preconception paternal alcohol consumption can be inherited by their children.

Thus, we can say that fathers play a role in making the fetus more vulnerable to PAE and contributing to FASD.

Further research is needed, but based on the available evidence, it is recommended that both parents who plan to be pregnant avoid at-risk alcohol consumption in the preconception period to prevent the possibility of FASD.

If a man drinks, can his sperm cause FASD?

The drinking behaviours of male partners do not cause FASD, but they can have an important influence on mothers’ drinking habits and the healthy development of their babies.  Alcohol consumption in fathers has been associated with:

I have asked for clarification.

Stay tuned for Day 10 on this 99 Day Journey to FASDay!

One thought on “Day 9 of 99 Days to FASDay: Dads Role in Health of Children”